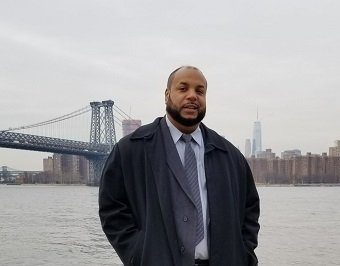 Derrick Parker – Mr. Parker has more than 20 years of experience in Law Enforcement, Investigation, and Executive Protection. Derrick Parker held the rank of Detective First Grade in the N.Y.P.D. In his career, he has served as Detective for the Bronx Narcotics Division, Brooklyn North Homicide Squad, Cold Case Squad, Homicide Squad and the Intel Unit.

Mr. Derrick Parker was appointed as a Deputy U.S. Marshall and worked with the U.S. District Attorney’s Office, Bureau of Alcohol, Tobacco, and Firearms (A.T.F.), the Drug Enforcement Agency (D.E.A.) and the Federal Bureau of Investigations (F.B.I.).

After working undercover on numerous homicide cases, Mr. Parker was assigned to unsolved murder cases, including those of the late rappers, The Notorious B.I.G. and Tupac Shakur. Because of his expertise, he was selected by the New York City Police Department to design and implement a strategy to reduce violence in the Rap and (hip-hop) Music Industry. Subsequently, this strategy was adopted on a National Level. Mr. Parker has worked closely with Music Celebrities, Police Departments and Federal Agencies around the country to execute this first of its kind strategy, targeting an industry that has suffered from high-profile violence and unsolved homicides.

Since retiring from the N.Y.P.D., Mr. Parker has run massive-scale events in which the security detail was wholly dependent on his skill and expertise to create a hands-on operation within the specifics of the event and in conjunction with the local Police Departments. Mr. Parker has also been asked to assist in high profile cases such as the murder of the Legendary Hip-Hop DJ, Jam-Master Jay.

After retiring from his post as a detective, Mr. Parker has utilized some of his special skills as Counterfeit/Fraud Expert, and while working with the World Wrestling Federation, he reduced the counterfeiting of products to the tune of several million dollars in one year.

Mr. Parker serves as Executive Protection for the stars such as Dwayne Johnson A.K.A the “The Rock”, the McMahons family, Joanie Laurer A.K.A. “Chyna”, SWV, Teddy Riley to name a few.

The long-awaited release of Mr. Parker’s best-selling book, The Notorious C.O.P., is about Mr. Parker’s personal life, his life as an N.Y.P.D. Detective and Rap Intelligence Officer and how it all collided together, making him the nation’s leading “Go-to-Guy” concerning rap-related crimes and mysteries.

Since the release of his book, “The Notorious C.O.P.”, Mr. Parker has been requested by Allhiphop.com , Spin.com , Complex.com,  Encyclopedia.com